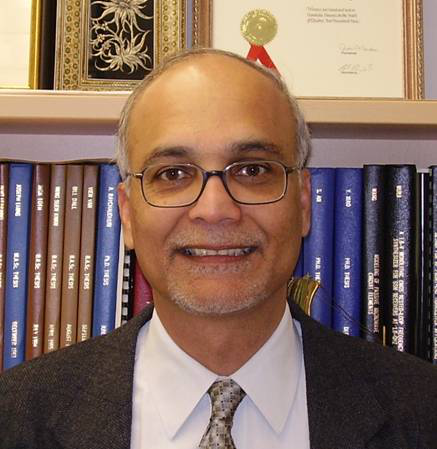 As an undergraduate student at the University of Guyana, Dr. Deen was the top ranked mathematics and physics student and the second ranked student at the university, winning the Chancellor’s gold medal and the Irving Adler prize. As a graduate student, he was a Fulbright-Laspau Scholar and an American Vacuum Society Scholar. He is a Distinguished Lecturer of the IEEE Electron Device Society for more than a decade.  His awards and honors include the Callinan Award as well as the Electronics and Photonics Award from the Electrochemical Society; the Distinguished Researcher Award from the Province of Ontario; a Humboldt Research Award from the Alexander von Humboldt Foundation; the Eadie Medal from the Royal Society of Canada; McNaughton Gold Medal (highest award for engineers), the Fessenden Medal and the Ham Education Medal, all from IEEE Canada. In addition, he was awarded the four honorary doctorate degrees in recognition of his exceptional research and scholarly accomplishments, professionalism and valued services. Dr. Deen has been elected by his peers as Fellow/Academician of twelve national academies and professional societies including The Royal Society of Canada (FRSC) - The Academies of Arts, Humanities and Sciences of Canada (the highest honor for academics, scholars and artists in Canada); Academician (Foreign Member) of The Chinese Academy of Sciences (A-CAS, China’s highest national honor in the area of science and technology and highest academic title); The World Academy of Sciences (FTWAS), National Academy of Sciences India (FNASI-Foreign); The Institute of Electrical and Electronic Engineers (FIEEE); The American Physical Society (FAPS); and The Electrochemical Society (FECS). Most recently, he was elected to the Order of Canada (July 2018), the highest civilian honor awarded by the Government of Canada.

Some of the grand challenges in engineering for current and future societal needs require smart sensors, many of which are constructed using nano/opto-electronic technologies. For example, in the health area, smart sensing systems are required for screening, diagnostics and monitoring of a variety of diseases and illnesses for the health of well-being of individuals. For example, cancer is one of the leading causes of death globally. However, if the cancer can be detected in the very early stages of development, the survival rate of the patients is significantly improved and for some cancers such as breast or prostate cancer, the survival rate is close to 100%. Further, early detection translates into improved treatment outcomes at significantly reduced costs. Among the different imaging techniques, positron emission tomography (PET) is demonstrated to be an incredibly valuable tool for screening and diagnosis of cancer since the PET system is able to generate functional image to observe biological processes in the body. These systems require high precision, high temporal resolution and high contrast medical images for more accurate diagnoses. In the early days, most commercial PET systems were based on bulky photomultiplier tubes (PMTs), which lack compatibility with multi-modal PET/MRI imaging. A promising solution is the integration of single-photon avalanche diodes (SPADs) with time-to-digital converters (TDCs), integrated closely together on the same wafer to form digital silicon photomultipliers (dSiPMs). These dSiPMs are capable of achieving comparable gain and speed to PMTs, while maintaining full compatibility with strong magnetic fields, lower power consumption, compact size and low cost. Our work focusses on the design of SPAD-based image sensors implemented in standard silicon technology, as it provides the lowest cost alternative, compared to SPADs in custom processes. By improving the noise performance of standard silicon SPADs with guard ring and time-gating techniques, improving photon detection efficiency (PDE) through multi-junction SPAD structures, and producing higher resolution TDCs in compact areas, our work can help in making SPAD-based sensors a new gold-standard for biomedical imaging applications. In Fall 1999, he joined the University of Southern California, Los Angeles, where he is currently a Professor of the Ming Hsieh Department of Electrical and Computer Engineering. From July 1, 2009 to June 30, 2018, he chaired the Electrophysics division of the department. From Spring 1991 to Fall 1999, he worked at the Department of Electrical Engineering in the University of Hawaii at Manoa as a faculty member. Previously, he worked at IBM Research Laboratory, San Jose, CA, NCR Corp., San Diego, CA, and Xicor Inc., Milpitas, CA as a co-op student, design engineer, and summer-student engineer, respectively.

Prof. Kim is an expert in piezoelectric and acoustic MEMS as well as electromagnetic vibration-energy harvesting, having published a textbook entitled, “Fundamentals of Microelectromechanical Systems (MEMS),” about 250 refereed papers, and 16 issued US patents in the field. He is a Fellow of the Institute of Electrical and Electronics Engineers (IEEE) and the Institute of Physics (IOP). He serves as an editor for IEEE/ASME Journal of Microelectromechanical Systems. He has been awarded a Research Initiation Award (1991-1993) and a Faculty Early Career Development (CAREER) Award (1995-1999) by National Science Foundation.  He received Outstanding EE Faculty of the Year Award at U. of Hawaii in May 1996 and the IEEE Transactions on Automation Science and Engineering 2006 Best New Application Paper Award.

Department of Electrical and Computer Engineering

There are unmet needs in (1) continuously monitoring lung sounds (e.g., wheezing) with a wearable stethoscope and (2) powering wearable devices without the burden of frequent battery recharging or replacement. This talk presents a MEMS resonant microphone array (RMA) for pre-filtered acoustic signal acquisition and a novel signal classification algorithm that benefits from the RMA’s properties. The use of an RMA at the input simplifies several of the required digital processing steps necessary for performing spectral filtering and wheezing recognition. The recognizer system is evaluated and compared against a traditional approach, and the experimental results show that recognition processing time (and power consumption) can be reduced 11 times. Classification experiments also indicate a robustness in recognition accuracy to low-frequency-dominated background noises, such as those emitted by the heart. The findings suggest that this technique has wide-ranging applicability to low-power and self-powered wireless sensing and detection systems. To meet the need to power wearable devices, vibration energy from human’s natural motion can be converted to electrical power to replace or supplement battery. Our results show that there are many pathways to making the vibrational energy harvesters (VEHs) small and light in spite of the extremely low vibration frequency (1 – 4 Hz) and power inherent in human’s natural motion. This talk presents unconventional approaches in generating electrical power from human movements (such as walking) without loading the person, with a specific focus on a non-resonant VEH based on proof-mass suspension with liquid bearing. Frank Schwierz received the Dr.-Ing. and Dr. habil. degrees from Technische Universität (TU) Ilmenau, Germany, in 1986 and 2003, respectively. Presently he serves as Privatdozent at TU Ilmenau and is Head of the RF & Nano Device Research Group. His research is focused on novel device and material concepts for future electronics. At present, he is particularly interested in two-dimensional electronic materials.

Dr. Schwierz is conducting research projects funded by the European Community, German government agencies, and the industry. Together with partners from academia and industry, he was involved in the development of the fastest Si-based transistors worldwide in the late 1990s, of Europe's smallest MOSFETs in the early 2000s, as well as of the fastest GaN HEMTs on Si and the fastest GaN tri-gate HEMTs worldwide in the 2010s. His recent work on two- dimensional materials made a major contribution to the current understanding of the merits and drawbacks of graphene transistors.

Dr. Schwierz has published more than 280 journal and conference papers more than including 50 invited/keynote papers. He is author of the books Modern Microwave Transistors – Theory, Design, and Performance (J. Wiley & Sons 2003) and Nanometer CMOS (Pan Stanford Publishing 2010) and editor of the book Two-Dimensional Electronics – Prospects and Challenges (MDPI 2016).

Dr. Schwierz is Senior Member of the IEEE. He serves as committee member of international conferences (most notably IEDM 2018 and 2019), as a Distinguished Lecturer of the IEEE Electron Devices Society, and as an editor of the IEEE Transactions on Electron Devices. Moreover, he has been one of the key contributors to the Emerging Research Devices Technology Working Groups of the 2013 and 2015 ITRS editions.

Past, Present, and Future of CMOS Scaling

For decades, CMOS scaling has been the key driving force in digital electronics. While scaling has always been demanding, recently more and more people in the electronics community express concerns about a slowing down and an approaching end of CMOS scaling. On the other hand, chipmakers still proceed with scaling and a lot of processing innovations as well as new transistor architectures are explored. In the present talk, we review the evolution of CMOS scaling, starting with Dennard’s scaling rules elaborated in the early 1970s at IBM and ending with the demonstration of the first CMOS chips fabricated in IBM’s 2-nm technology in May 2021. We discuss the four stages of scaling, i.e., (i) traditional scaling and (ii) equivalent scaling of conventional single-gate MOSFETs, (iii) FinFET scaling, and (iv) scaling of gate-all-around stacked nanosheet channel FETs. Moreover, important trends in digital CMOS are analyzed and beyond-CMOS solutions for information processing are highlighted. Juin J. Liou received the B.S. (honors), M.S., and Ph.D. degrees in electrical engineering from the University of Florida, Gainesville, in 1982, 1983, and 1987, respectively. In 1987, he joined the Department of Electrical and Computer Engineering at the University of Central Florida (UCF), Orlando, Florida where he held the positions of Pegasus Distinguished Professor, Lockheed Martin St. Laurent Professor, and UCF-Analog Devices Fellow. His research interests are electrostatic discharge (ESD) protection design, modeling and simulation, and characterization. Currently, Dr. Liou works as a chair professor of Shenzhen University, China and endowed professor of Zhejiang University, China.

Dr. Liou holds 20 patents and has published 13 books (1 more in press), more than 310 journal papers (including 21 invited review articles), and more than 250 papers (including more than 110 keynote and invited papers) in international and national conference proceedings. He has been awarded more than $14.0 million of research contracts and grants from federal agencies (i.e., NSF, DARPA, Navy, Air Force, NASA, NIST), state government, and industry, and has held consulting positions with research laboratories and companies in the United States, China, Japan, Taiwan, and Singapore.

Dr. Liou received ten different awards on excellence in teaching and research from the University of Central Florida (UCF) and six different awards from the IEEE. His other honors are Fellow of IEEE, Fellow of IET, Fellow of AAAS, Fellow of Singapore Institute of Manufacturing Technology, Fellow of UCF-Analog Devices, Distinguished Lecturer of IEEE Electron Device Society (EDS), and Distinguished Lecturer of National Science Council. He holds several honorary professorships, including the Chang Jiang Scholar Endowed Professor of Ministry of Education, China – the highest honorary professorship in China.

Electrostatic discharge (ESD) is one of the most prevalent threats to the reliability of electronic components. It is an event in which a finite amount of charge is transferred from one object (i.e., human body) to the other (i.e., microchip). This process can result in a very high current passing through the microchip within a very short period of time, and more than 35% of chip damages can be attributed to such an event.  As such, designing robust on-chip ESD structures to protect microchips against ESD stress is a high priority in the semiconductor industry. The continuing scaling of CMOS technology makes the ESD-induced failures even more prominent, and one can predict with certainty that the availability of effective and robust ESD protection solutions will be a critical factor to the success of the deep sub-micron technology advancement. In fact, many semiconductor companies worldwide are having difficulties in meeting the increasingly stringent ESD protection requirements for various electronics applications.

There has been a wide-spread use of electronic components in high-voltage applications, such as automotive integrated circuits which are typically operated in a voltage range of 40-60 V. This relatively high-voltage operation imposes certain challenges to the design of high-voltage ESD protection solutions. On the other hand, due to the huge market of civil wireless communications, low-voltage integrated circuits are also in high demand. Design of effective ESD protection for these circuits typically requires a very narrow ESD operation window and minimal loading effect (i.e., high transparency), hence introducing a different set of challenges.